Jeff focuses his practice on civil litigation. He has extensive experience in the areas of eminent domain, municipal law, criminal law, mechanics liens, insurance defense, subrogation, and creditors’ rights. He handles most of the firm’s forcible entry and detainer litigation. He has represented small businesses and homeowners associations in reviewing and updating covenants and declarations as well as collecting fees owed. He has served as a local prosecutor for small villages in Will County, being responsible for the prosecution of traffic offenses and ordinance violations. Prior to joining Kavanagh Grumley & Gorbold, he also represented the Will County Division of Transportation in the acquisition of numerous parcels through the use of eminent domain for roadway construction. Jeff is an active member of both the Illinois Bar Association and the Will County Bar Association, for which he serves on the Board of Directors. Jeff was  selected by the Leading Lawyers network as an emerging lawyerSM from 2017 to the present.  In his spare time, Jeff is an avid golfer and is very active in his church, St. Joseph’s Joliet. 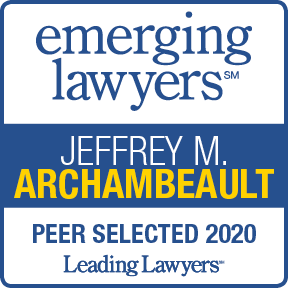